This video comes to us from our friends Downunder.  It shows one sheep producer’s experience with using rotational grazing to improve his pastures.  With just three fences dividing a 45 hectare pasture (111 acres), John Keogh says, “We’ve picked up 4 DSE (dry sheep equivalents) per hectare and has seen a 15 to 20% return on investment.” 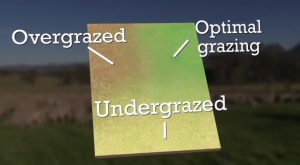 The result doesn’t surprise Tim Ekberg, advisor to the local producers .  “All the research shows that rotational grazing does increase winter stocking rates and can allow you to have a higher stocking rate through the year.”

It’s a great 4 minute look at the benefits of rotational grazing, along with some good news for our readers in arid regions.  It shows that you can make beneficial changes without lots of effort.  It also shows something we don’t often see: video of 1500 sheep moving through a rotationally grazed pasture.