Farmers battle to keep critters away from their crops 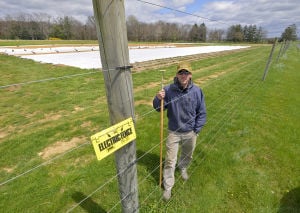 When Andrew Buckwalter decided to grow vegetables on his 100-acre Warwick Township farm seven years ago, he didn't mess around.

First, he shelled out about $7,000 to enclose an 8-acre vegetable plot inside a multi-strand, 8-foot-tall electrified fence.

"I had been on enough farms to know what deer can do, so I wasn't taking any chances," Buckwalter said. "I don't even want to think about what a couple of deer could do if they had access to those vegetables."

Across Lancaster County, it's planting season.

And while those of us who love our locally grown sweet corn, lettuce, spinach, strawberries and all the other delicacies are champing at the bit for harvest time, farmers are thinking about other mouths they'll soon be feeding.

Deer, raccoons, groundhogs, skunks, birds and other wild critters all take a bite out of local crops, which represent a $150 million business here, according to the U.S. Department of Agriculture's 2007 Census of Agriculture.

Current estimates of the financial impact of wildlife-caused crop damage in Pennsylvania don't seem to exist.

Mark O'Neill, media and strategic communications director for the Pennsylvania Farm Bureau, said he wasn't aware of any statistics detailing that kind of damage.

A 2003 study by Penn State University estimated the average farmer across Pennsylvania lost about $9,000 per year due to crop damage.

Another 2003 study, this one done at Rutgers University in New Jersey, of economic losses caused solely by deer in 1994-2000 pegged damages statewide at over $43 million.

That study did not include a county-by-county breakdown.

Lancaster County ranked third in the state for the value of its crops, according to the 2007 USDA census.

"But it's serious enough that (farmers) all think about it."

According to several Lancaster County farmers, there's a certain level of crop damage from wildlife that's expected each year.

“It's something you learn to live with,’’ said Roy Martin, co-owner of Green Hills Farm in Warwick Township, where the family grows feed corn and soybeans.

But when animals push the envelope too far, local farmers fight back.

They also build fences, and hunt, trap and harass animals to keep them away.

"Just about the time you think you have them figured out, something else pops up, or they learn a new trick," Hess said. "It never ends."

It's true that Lancaster County doesn't have the abundance of wildlife that can be found in some of Pennsylvania's more rural areas, such as Huntingdon or Potter counties.

Lancaster County doesn't have the habitat to support as much wildlife as other places.

According to the Lancaster County Conservancy, only 16 percent of the county is forested.

Comparatively, a 2009 study by the U.S. Forest Service found that 58 percent of Pennsylvania is considered to be forested.

Despite the lack of forest cover here, we've still got plenty of animals looking for quick, easy meals.

Jason Charles is co-owner of The Strawberry Field in East Hempfield Township.

In a few weeks, he'll be harvesting the 10 acres of strawberries he and his partner, David Landis, planted last August.

And they'll be hoping deer didn't do too much damage to the plants when they were young.

"We've got more deer than you can shake a stick at in East Hempfield," Charles said.

"We do everything we can to keep deer off our plants in September, October and November."

Those are the months when young strawberry plants "determine" how much fruit they'll produce the following spring, Charles said.

"Whatever they decide then, that's what you get in the spring," Charles said.

The healthier the plant is in the fall, the more berries it will produce in the spring.

Hungry deer can nibble at the plants, which reduces their yield, or they can rip them out of the ground altogether.

The Strawberry Field typically plants about 16,000 plants per acre.

Charles said he's seen years where deer have eaten or damaged up to 20,000 plants.

He's not able to put a dollar value on that damage.

So Charles and his partner have permission from the Pennsylvania Game Commission to shoot a couple of deer to ward off crop damage.

And they also do their best to harass deer out of their fields from September through November.

"We put up scarecrows and try to be around as much as possible — maybe take a ride through the fields in the evenings — just so the deer don't feel comfortable out there," Charles said.

Besides allowing farmers to shoot deer on a farm-by-farm basis, the Game Commission has the Agricultural Deer Control Program, which allows farmers to enlist help from hunters in culling deer numbers in late winter and summer, when there are no deer-hunting seasons.

It's commonly called the "red-tag program."

Farms are continuously being added and removed from the red-tag program, but as of April 21, there were two red-tag farms in Lancaster County — one in West Lampeter Township and one in Little Britain Township.

Since he built his fence at Buckhill Farm, Buckwalter has had only the occasional deer get inside his vegetable plot.

A bigger concern for him is groundhogs.

Those varmints often dig holes in and around his field, and they can scurry underneath his fence to get at his vegetables.

"We definitely keep our eye out for them," he said. "Whenever we see one, we try to trap it to get it out of there."

Unlike deer, groundhogs are open to general hunting by anyone with a license all year long — except for two weeks during the firearms deer season.

Hess said one of his sons shot 60 with a bow and arrow on one Lititz-area farm last summer.

Groundhogs and raccoons are particularly destructive in sweet corn patches, Hess said, because they tend to take one or two bites out of many ears, rather than take one ear and eat it whole.

"They seem to know when we're about to pick the corn, when the sugar content is highest, and they can move in ahead of us," Hess said. "Any ear they bite, I'm certainly not going to sell.

In recent years, Hess has tried planting strains of sweet corn that feature ears that grow higher on the stalk than other types.

"The higher we can get the ear, the less trouble we have from animals," he said.

He's also played around with sweet corn that has a tighter husk, which keeps the end kernels from popping out early and attracting birds, varmints and deer.

That has helped reduce damage some, he said.

"Overall, we continue to hear from our farmers about losses due to wildlife," O'Neill said.