Twenty years of grazing profitably, inside and outside the box

Ron Holter is one of the smartest farmers you could meet. He thinks things through to create the life he wants. Now his dairy cows eat no grain, aren’t high producing, and he has time to take a nap just about every day. Here’s how he makes a good living in spite of (or because of) all this. 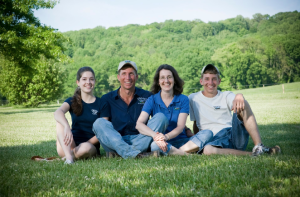 Holterholm Farms has been in the Holter family since 1889. Now owned and operated by Ron Holter with the help of his son Adam, it’s one of the few remaining farms in Middletown Valley in Maryland, about an hour and a half from Washington, DC.  In the early days, the farm was diversified. Later it became strictly a dairy farm, and the herd moved into the barn.  But when Ron bought the farm from his dad 20 years ago, he realized that industrial-style dairy farming wasn’t going to do anything but burn out him and the farm. He looked deep inside, and he prayed, and he put the cows on pasture about a year and a half later.  (See Making the Switch to Pasture Based Dairying for more on how he managed the change.)

Since making that big move, Ron has tried lots of things, settling on a diversified farm with a grass-based, organic, grain-free dairy. His goal has been to reduce inputs and labor while increasing profits.  Each change Ron has made was with a lot of thought, and each has lessons for all of us.

After switching to grazing, the next of Ron’s big changes was to move the herd to seasonal calving. Even in Maryland, winter is cold, and grazing doesn’t provide much feed. With careful money management and reduced inputs, taking two months off from milk production was feasible.   Now they dry the herd off right before Christmas, and don’t ship milk again until February 24th. That means ten months of milk checks cover the whole year, and that the two coldest months of the year don’t involve milking.  My hands feel warmer just thinking about not milking in the winter! 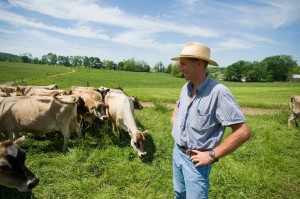 In 2005, almost ten years after switching to grazing, Holterholm Farms was certified organic. Going organic fit with Ron’s low input management style, and it gave him some stability in milk prices when they signed with Organic Valley.

If you know much about organic dairy farming, though, you might know about the high cost of organic grain. Since Ron is all about reducing inputs, this meant that he began looking at going grain-free as well. It was something he had wanted to do since he started grazing, because as he says, with passion in his voice, “Cows aren’t created to eat grain. It lowers the quality of the milk.” Plus, he adds, “Not feeding grain makes the milk GMO free.”  Ron knew that New Zealand, farmers don’t feed their cows grain, so he figured Holterholm farm could do it successfully too.

It turns out that the switch to grain-free wasn’t such a big one. For years, they had been breeding their herd of Jerseys towards a herd that required less grain, and their animals had only been getting 4 lbs of grain per cow per day. In 2007, when they stopped feeding grain altogether, the drop in production was pretty much balanced by the cost of grain.

Because Ron and Adam don’t feed grain, pasture management became that much more critical. To make sure pasture quality is as high as possible, Ron tries to walk the pasture every week to plan the rotation. The herd is out on pasture year round, fed hay during the winter months. Ron explains they “hay some of the pastures and feed the hay back to the herd on those pastures to maintain and build fertility.” Ron and Adam work at increasing forage diversity as well. Pastures get over seeded regularly, working toward an herbal ley mixture, a complex mix of pasture forage plants. 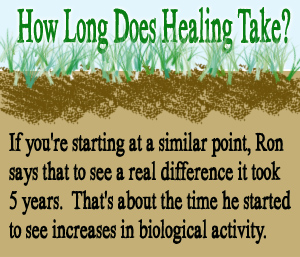 Ron’s tried some other management tools as well. When he began farming, the land had been cropped for decades, and it didn’t have the biological diversity and soil health Ron was striving for. To heal the land, he gave it a break, fallowing 1/7th of the pastures each year. The grasses were allowed to grow up, ungrazed, until they were tall and brown, letting their roots reach deeper into the soil. After years of this, he found that it was no longer necessary, and in fact was causing some negative effects. Urine spots were visible, indicating low nitrogen levels in the fallowed pastures. Those pastures also lost biological diversity from not having animal impact on it for 6-10 months in a year.

Now that the pastures are healed, Ron says “because it’s a non-brittle environment, [they] don’t need the break when you’re not trying to heal the land. Taking 50 years of a cropped farm and getting it back to a biologically active soil, it needed the healing. Now that the wheels are turning [in the soil], the rest doesn’t seem as necessary.”

Ron and Adam have a cull rate of 3-4%. They do cull a few each year that don’t meet the pregnancy window, but those go to other farms as dairy animals. Their oldest cow is a young 14; until recently the oldest milker was about 17. They raise their calves using nurse cows. They find the nurse cows are a great addition, and a story for another time.

One more thing Ron and Adam tried was tall sward grazing. It just didn’t work for their herd of Jersey dairy cows. They were moving cows two to five times and up to 8x per day, but they couldn’t get the Jerseys to do more than pick at the green leaves. They followed the Jerseys (dairy) with Herefords (beef). The Herefords were getting fat, but the Jerseys lost condition, and with that came a loss in production. They tried tall grazing for a year and a half, but it just didn’t work for them. Now they put the Jerseys in  at 12-18″, not the fully mature tall swards they had been grazing.

So How’s the Bottom Line Doing? 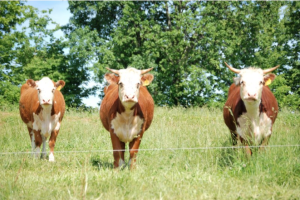 The farm is also a place for other products. It’s not just a dairy farm anymore. The farm provides eggs and ground beef, and a few times a year, they sell beef by the quarter, half and whole. Ron and Adam hope to build a farm store one day, but not just yet.

All this works for the Holters, with numbers that might surprise you. Their rolling herd average milk production is only 6500 lbs. That’s per cow.  But they are profitable. In fact, their overall profit over costs is 30.1% for a three year average that includes two years of poor production when the herd was grazing the tall sward. The 30.1% of the milk check more than covers the family’s living expenses with some left over.

Holterholm Farms is profitable because their production costs are kept low, very low. By focusing on costs of inputs, not just on volume of outputs, Ron and Adam have made the farm work for them, not just the other way around.  It’s a lesson that could serve us all very well.